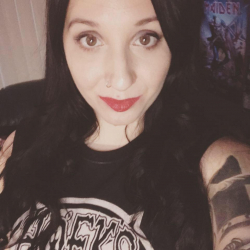 Stephanie Jensen
Stephanie Jensen spent years of her childhood enjoying quality time with her Sims games. As someone who's bought way too many expansion packs, she now needs a way to work to pay for her Sims addiction. So, she spends her time teaching others about Sims!

The Sims 4 so far has over 20 million players. This game offers so much more than previous games, making it a new favorite. But some things never change for longtime Sims fans, such as operating the darker sides of the games.

One of these examples is taking your character down the crime life — especially since your Sim can become a professional criminal! Here’s your guide to the criminal career.

To play out the criminal career path, I decided to make a Walter White Sim (albeit a much younger one compared to our favorite Breaking Bad character).

Sure, there’s no option to make drugs in The Sims 4, but my Sim can play out the evil and genius qualities that made Walter White a criminal mastermind. 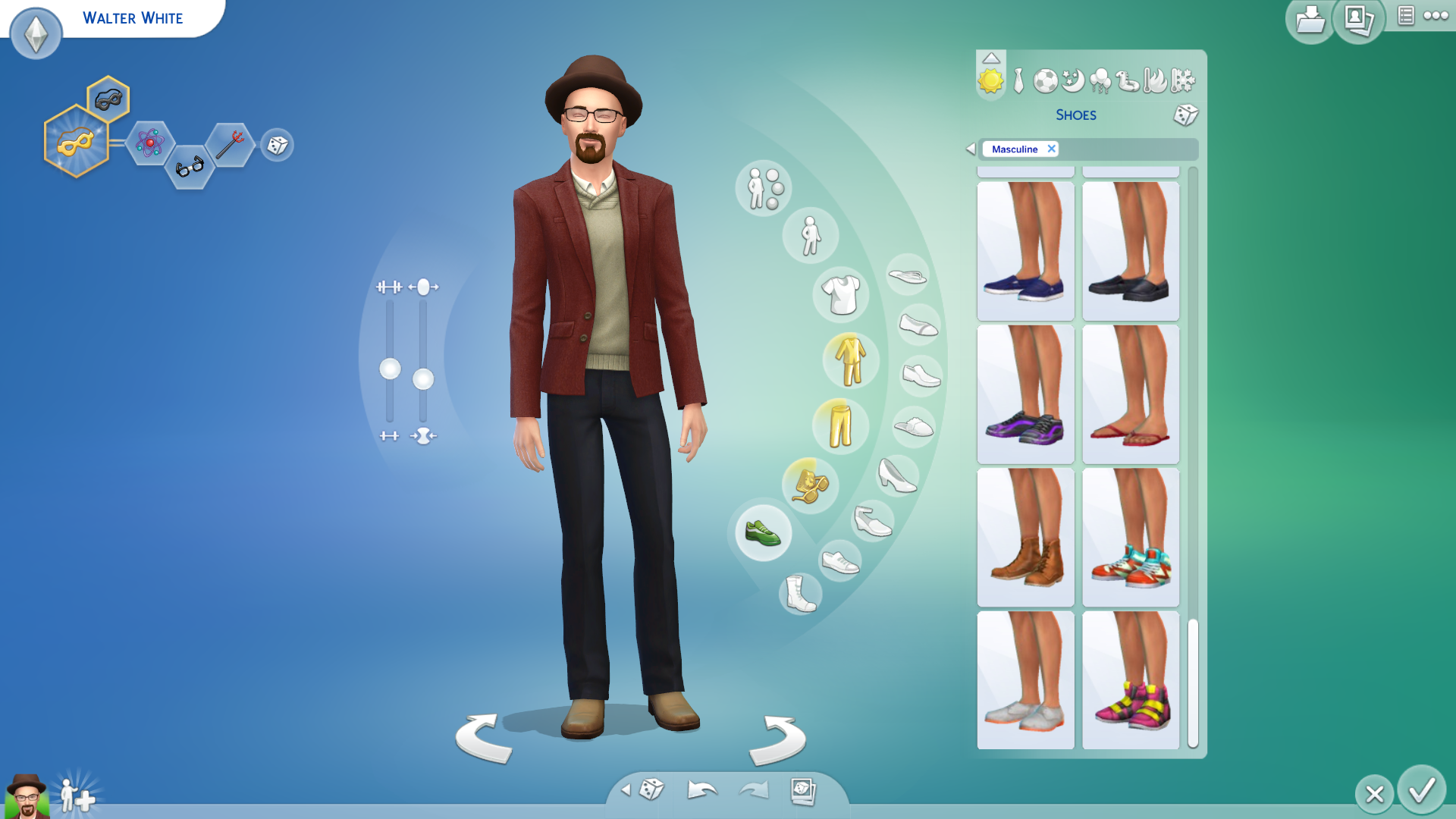 When you first begin your criminal career, you’ll start by taking up simple and typical devious jobs (we will discuss these in the next section). But once you reach level 5, you can choose either the Oracle or Boss branch.

The Oracle branch was one I didn’t choose, but I find it an extremely interesting branch and it represents a modern type of criminal that heavily gets overlooked.

In the Oracle branch, your Sim will focus heavily on hacking. Your Sim has to be great with computers, especially since some of the tactics you have to accomplish include downloading computer viruses and other technological evils.

Keep in mind, Sims in the Oracle branch aren’t mean like Bosses (we will explain this more in another section). However, your computer hacking Sim does have to be Mischievous as well as extremely skilled.

When creating your Sim, it’s recommended to know which criminal branch you want your Sim to choose. In the Oracle branch, certain traits will come in handy, such as the Genius trait. Your Sim will be more focused, applying their brain to specific tasks such as programming.

When you choose the Oracle branch, you’ll unlock the best computers in the game as well as various other interactions.

The Boss career branch is what most people think of when they give their Sim a career in crime. Bosses are, well, crime bosses. They make enemies, rob banks, commit other forms of mischief, and yes — they kill people.

Bosses not only have to be mischievous but also have to be mean. Some of your required activities include being mean to other Sims, which is where certain traits such as “Evil” will benefit you. You’ll also receive a stolen ATM.

Since Boss is a more hands-on path, you’ll need to achieve the handiness skill. Achieve this by fixing appliances in your home or purchasing a woodworking table.

More people tend to choose the Boss branch because it pays the best and your Sim will work fewer hours.

I chose Boss for Walter White. Sure, he had the amazing mind to succeed in the Oracle branch. But Mr. White’s specialty was chemistry, not computers. And c’mon, he totally was the boss in the show.

There are 10 maximum levels on the Criminal career. Here’s a breakdown of the different jobs in each branch.

How to Advance in Your Career

Every career has skills and daily goals that you’ll have to accomplish. But what makes the criminal career path different, at least for the first five or so levels, is that your goals and skills only lie within the Mischief skill. 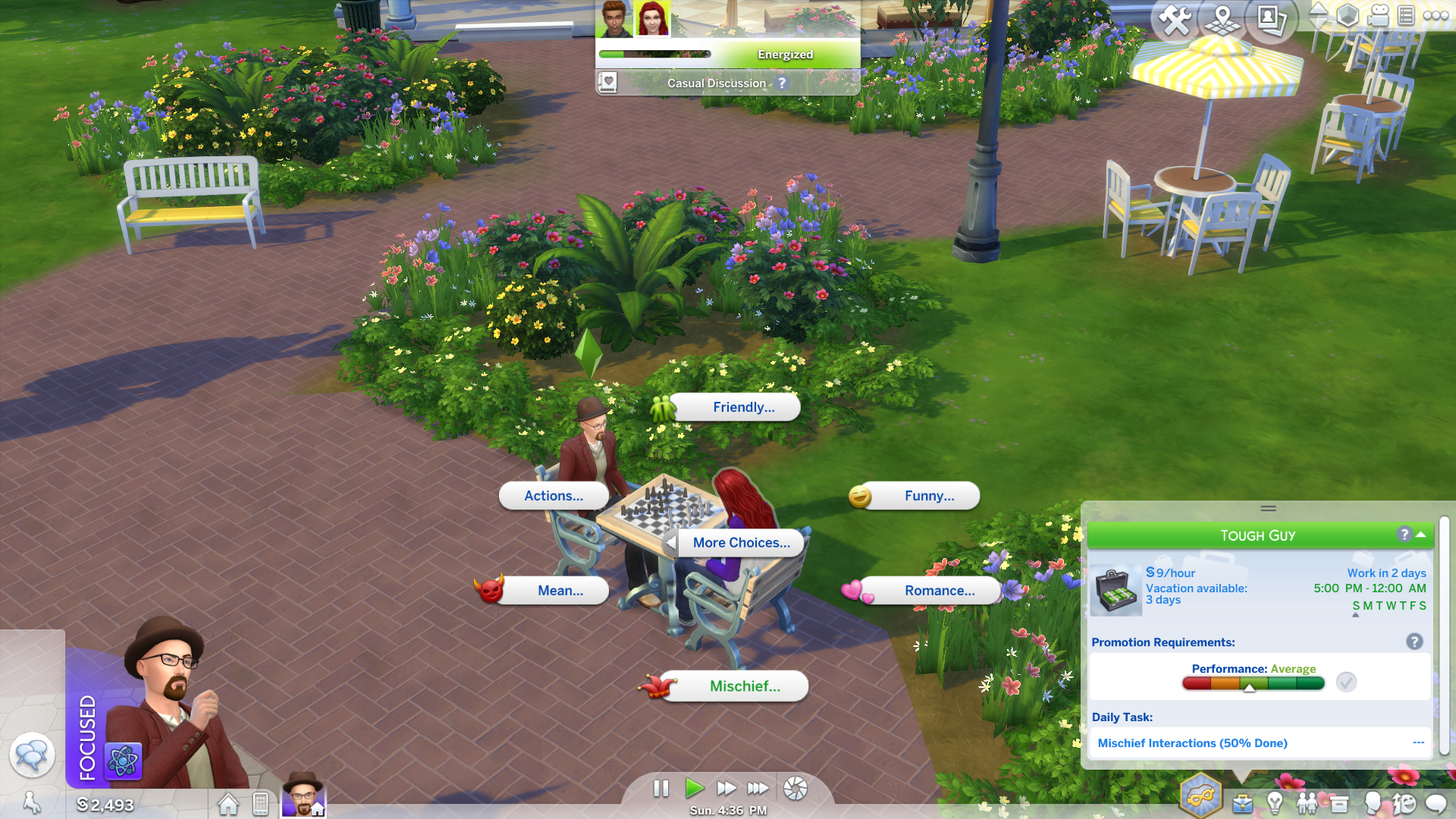 You’ll have to level up in your Mischief skill and engage in mischievous interactions. In other words, you have to be completely evil toward other Sims on a daily basis.

What I did was carve out time for my Sim to talk to others. You can do this by talking to other Sims in-person, inviting Sims over, talking to them on the phone, or even online.

However, my method of madness was traveling to other destinations, such as bars, lounges, parks, the gym, museums, the library — anywhere that attracts groups of Sims. From here, my Sim would talk to others and I would command them to use various mischievous interactions.

The different Mischievous interactions include:

Giving your Sim certain traits will help them improve their work performance and will help them easier accomplish their aspiration goals. Here is a breakdown of the different traits that we recommend.

Mean is exactly what it sounds like. Your Sim will take great pleasure when engaging with other Sims, using both Mean and Mischievous interactions. Certain moodlets may appear, such as Happy when they’re being mean and Confident after winning a fight.

The Evil trait is similar to Mean. Your Sim will become Happy when other Sims have negative moodlets. Evil Sims also have unique interactions and actions that other Sims don’t possess, specifically the ones who are good.

Hot-headed Sims tend to be angry. They tend to rile up other Sims, which is an easier way to create enemies.

Traits My Sim Has

For Walter White, I decided to experiment with some recommended traits and other traits that coincide with his character. I kept the Evil and Dastardly traits but also added Geek and Genius.

Geeky Sims are happy when they play video games or read Sci-Fi books. They tend to get powerful moodlets when engaging in certain activities, such as programming and mechanics. I don’t think this affects Sim’s evilness at all.

Anyone who watched Breaking Bad knew that Walter White was a genius chemist and his intelligence benefitted his evildoings (how many drug kingpins poison their enemies with ricin)? So, I was curious to see if the Genius trait benefitted Evil Sims.

Genius Sims have specific moodlets, such as Focus. They share more ideas with Sims and get upset if they don’t improve certain skills.

The Genius trait benefits my Sim greatly. Walter is more charismatic when being mischievous and he’s focused when accomplishing his Evil goals. Since he accomplishes skill and career goals, he’s always happy.

In addition to career goals, it’s recommended your Sim has specific aspirations that will help them accomplish life goals. There are two aspirations that coincide with the Criminal career path: Chief of Mischief and Public Enemy.

Overall, the Chief of Mischief aspiration is ideal for those who want to make their Sims mean. They will wreak havoc on their family and friends, and their goals only increase their meanness.

Each milestone increases your Sim’s deviousness and encourages them to make enemies. You’ll also be instructed to enhance your Mischievous skills, both in-person and online.

When you complete the aspiration, you’ll be rewarded the Tormentor Reward Trait where you can perform a variety of pranks. 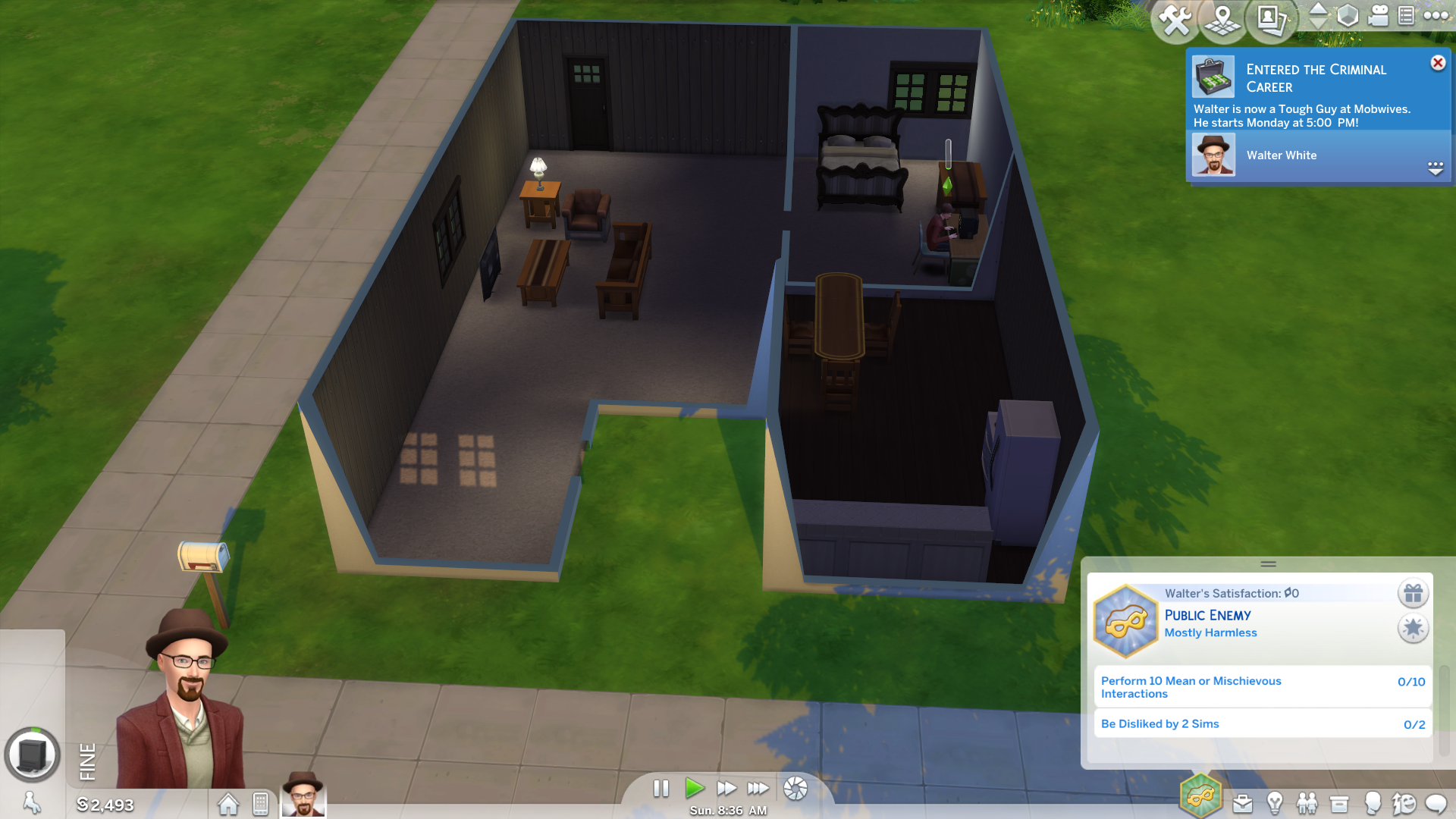 This is the aspiration I chose for Walter White. Unlike Chief of Mischief, Public Enemy focuses more on being evil. This aspiration also coincides better with the Criminal career path.

Some of your first goals include being mean and making enemies. Keep in mind, making enemies isn’t as easy as you think. If you’re immediately mean, Sims usually walk away from you. What I noticed works is being nice at first and then surprising the other Sim with insults and other Mean interactions. 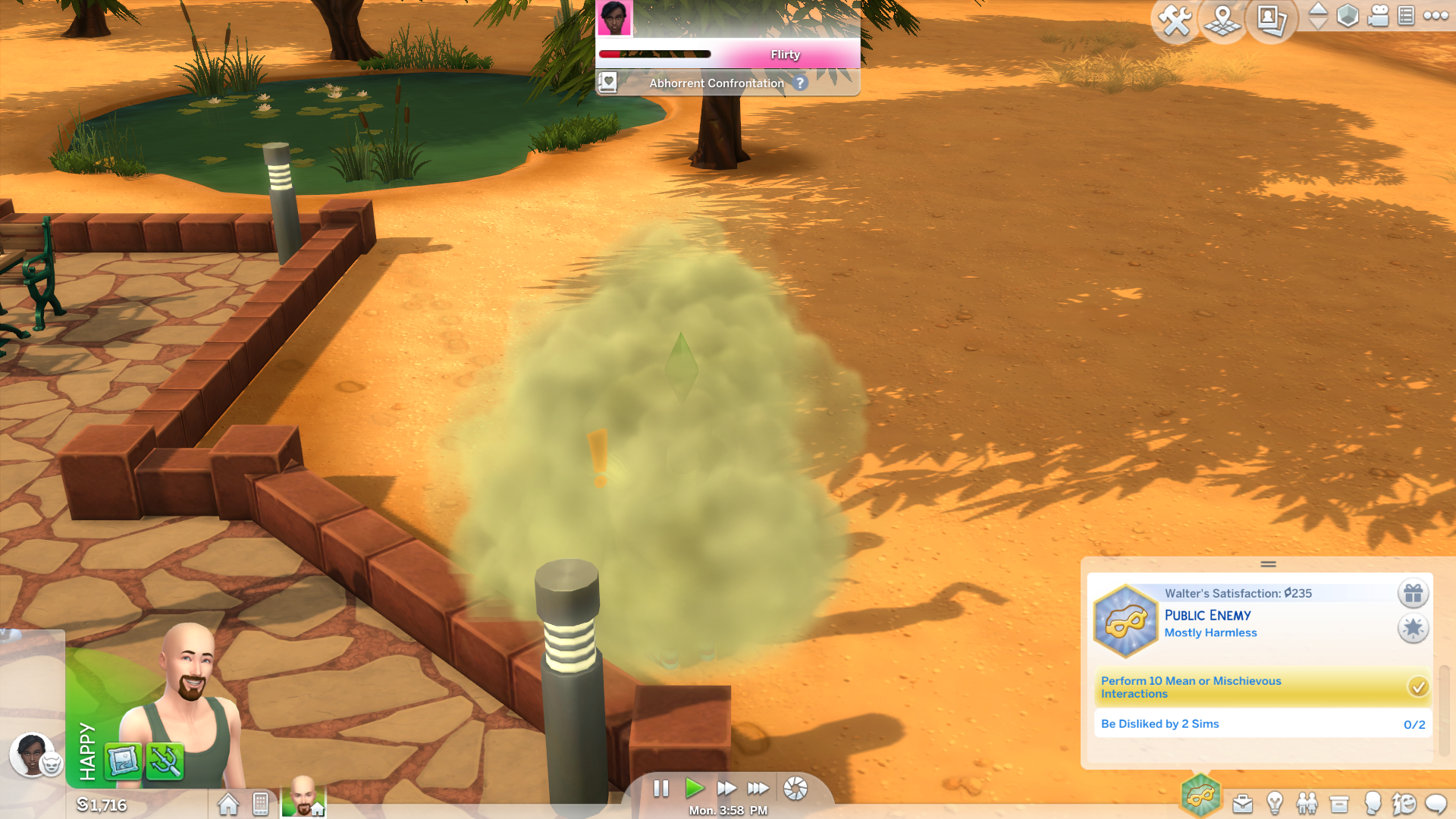 As you advance in this aspiration, the game starts getting violent. You’ll eventually have to get into fights and even witness a death to complete the aspiration.

Witnessing death is the trickiest goal to accomplish. I tried (unsuccessfully) to kill other Sims. One player on Reddit said they lured Sims into their home, enclosing them in walls without doors, and starve them. This took too long. Also, if my Sim left the house, the player would vanish.

You can also try going this route but putting a stove in the room so the Sim potentially starts a fire and burns to death (though you risk burning your house down).

When you accomplish all of your goals, you’ll earn the Mastermind reward trait. You’ll be able to better influence emotions and gain a few new evil social interactions.

Question: What Skills Are Needed in the Criminal Career?

Answer: The skills you obtain largely depend on the branch you choose. But you all criminal Sims will at least have to continue advancing in their Mischievous skills.

The best way to accomplish this is by choosing Mischievous interactions when communicating with other Sims and using certain interactions on the computer, such as “Troll the Forums.”

Question: How Do You Level up in Your Criminal Career?

Answer: As with all other careers, the best course of action is to accomplish all prerequisites and achieve your daily goals. There are also career cheats you can apply if you want to advance in your career quicker.

Answer: Yes! As you advance in your Criminal career, the chances of you being arrested increase. They may receive a career chance card, and the outcome is being locked up.

Unfortunately, you can’t witness their jail life. If your Sim gets arrested, they will be off-camera for a certain duration.

Question: Are There Still Burglars in the Sims 4?

In addition, if you chose the criminal career path in older Sims games, you could also become a thief!

The best was when they were caught. The burglar would just march off the screen with their hands up in the air, not even getting arrested. Talk about obedient thieves!

As of now, there are no burglars in the Sims 4. However, the makers of the game are considering bringing back our favorite striped sweater bandits!

Question: Is the Criminal Career the Highest Paying Career in The Sims 4?

Answer: While the Boss criminal career path is up there in earnings, it’s surprisingly only number 3 on the list! The two highest-paid careers are Triple Agent (Secret Agent path) and the highest-paid career is Interstellar Smuggler (Astronaut path)

Question: Can You Commit Crimes in The Sims 4?

Answer: You don’t have to be a professional criminal to commit some vile actions! Here are the crimes that Sims can commit:
Vandalism
Burglary/mugging
Pickpocketing
Drunk in public
Keep in mind, Sims can’t commit violent crimes — though some players have reported being able to kill another Sim using cheats. I tried this and it didn’t work for me.

Don’t Want to Become a Criminal?

Are you interested in discovering what other careers are available? Take a look at the full career list!

Sims 4 Self Employment Guide: How to Start a Career

How to Mentor in Sims 4